The shift from violence to peace in Burundi has been marked by heavy contestations over land as a result of mass displacement and repatriation (see Kamungi, Oketch & Huggins, 2005). To facilitate policy-making, these land disputes have been framed by different (inter-)national actors as opposing two major camps: repatriates vs occupants. In this dichotomist representation, repatriates refer mainly to former Hutu civilians who fled mass violence perpetrated by former Tutsi-dominated ruling regimes; while occupants involve civilians who took over refugees’ land in their prolonged absence. Yet, these land disputes are much more complex than that.

This short essay intends to shed light on how framing in interpreting and managing land disputes in Burundi leads to confusion and institutional competition. Framing refers to social practices and speech acts by which people construct social reality. Even though framing has been proven to guide and improve policy-making, for instance in (post-)conflict settings, it may disguise important elements of reality (van Leeuwen, 2010). By examining the genesis of land disputes and how they are dealt with in post-war settings, my recent fieldwork in Burundi illustrates how framing contributes to deviate attention away from wider political contention.

Since its independence, Burundi has experienced several episodes of widespread violence. Among those are the 1972-mass killings of civilians under the militarized and Tutsi-coloured Micombero regime. This violence generated thousands of Hutu refugees in neighbouring countries. In 1993, Tutsi army officers under Buyoya’s ruling murdered the first democratically-elected Hutu president, Melchior Ndadaye. This gave rise to a protracted civil war and new waves of displacement. Until 2006, the flight of more than 500,000 Hutu civilians in exile left vacant land holdings in rural areas.

During the conflict period, central and local government actors took advantage of the refugees’ absence and formally redistributed their land plots and properties to other civilians. The main motives guiding this land redistribution were consolidating political allegiance and control. Alongside this formalized dispossession of refugees’ properties, on-staying populations also encroached refugees’ properties through informal arrangements with local authorities. Over time, local land markets developed and, therefore, most of this land was passed through several owners originating from other localities for residential and commercial purposes. This situation has created a complex setting of overlapping land claims at the return of refugees.

land disputes have been framed as opposing two major camps: repatriates vs occupants

In fact, following the signing of the Arusha Peace Accord (APA) and of cease-fire agreements during the first half of the 2000s, the majority of refugees has repatriated with high expectations of recovering their pre-war land rights. These expectations were nurtured by the adoption of the international policy about housing and property restitution by post-war Burundian rulers. These policy frameworks narrowly depict refugees and displaced people as “legitimate land owners”, in contrast to “unlawful” occupants. Unfortunately, this representation does not question pre-war land property rights, acquisition modes, and manipulations to legitimize illegal land ownership. This polarized social representation is reproduced and emphasized within peace agreements and post-war national land policies. For instance, under the present Nkurunziza regime, the enactment of the property restitution policy follows a similar line of differentiation between repatriates and occupants. Two major attributes guide the interpretation of land disputes, namely attributes of ethnicity and presumed political loyalty.

Following the APA recommendations, two special national land commissions were successively created with the mission of settling refugees-related land disputes. The most recent commission is the national commission for land and other assets (CNTB, French acronym). The work of this commission focuses on applying the property restitution policy regardless of the diversity of pre-war and conflict-induced displacement trajectories and land acquisition modes. While doing so, repatriates’ and occupants’ social categories are defined, reshaped, and manipulated in order to cover political and nepotistic interests (Iwacu, 2015).

Most (but not all) former refugees and their descendants who fled following the 1972-genocide in Burundi are generally considered as the ‘real repatriates’. All others claimants are labelled as ‘occupants’ regardless of their own conflict-induced displacement trajectories. This construction of displacement-related fixed categorizations fails to integrate the complexity of individual migratory trajectories over time. Most claimants have been alternatively short and/or long-term refugees or internally displaced at specific periods of time depending on their respective coping strategies during past violent events.

Moreover, it would be wrong to assume that all people ascribed as or claiming to be repatriates are Hutu and natives from the locality where land disputes are located. Under the label repatriates are also people who, despite their assumed ethnic affiliation, never inhabited the community before the war. Some local narratives suggest that there are several fabricated claims over land in collaboration with the CNTB field agents and ruling party (CNDD-FDD) local leaders. In parallel to this, the label occupants cannot be applied to people with a Tutsi background. In fact, people from a wide diversity of social, political and economic background are involved in disputes over pre-war land ownership.

Furthermore, managing contested claims involving repatriates is particularly intense in the context of legal pluralism. Through practices of forum shopping, claimants strategically formulate their claims to optimize expected outcomes. In order to get their claims recognized by traditional elders, hill chiefs, decentralized state authorities, and CNTB officers claimants have demonstrated their capacity to make use of their own past by using various narratives. These narratives include kinship relations, heirs’ rights, territorial origin, migratory trajectories, and/or political legitimacy. However, those are often challenged both within and between statutory and customary dispute management arenas. Different institutions may have divergent interpretations of land claims, which lead sometimes to contradictory ruling over land disputes.

Therefore, within specific jurisdictions, some claims may be privileged over others. This implies institutional competition over the authority to adjudicate land disputes. At many occasions, traditional elders, hill chiefs, lawyers, and judges expressed their frustrations of being progressively excluded from settling refugees-related land disputes by the CNTB officers. Confronted with a government that turns a blind eye on this issue, opposition parties and civil society come to the conclusion that instead of promoting peace, justice, and reconciliation, land dispute resolution has become an instrument of domination (UPRONA, 2015). The claimants benefiting from land restitution are perceived as pro-CNDD-FDD and instruments of a hidden political agenda to shift past dispossession patterns. When the losers of the land dispute settlement became violent against the CNTB officers and police forces trying to evict them, they were framed as dissidents of the ruling Nkurunziza regime.

In conclusion, contestations over pre-war land rights are intimately related to social categorizations purposefully constructed, transformed, and manipulated by the practices and speech acts of actors and institutions. The boundaries between these social categorizations are blurred, negotiable, and politically sensitive. The case study of Burundi demonstrates how the “repatriates” land restitution policy, through the lens of a simplistic problematization of displacement-induced land disputes, (re-)produces dispossession, exclusion, and violence. The management of these disputes involves political contention about power, authority, and control.

This short essay derives from my PhD research, which is part of the research programme « Grounding Land Governance – Land Conflicts, Local Governance and Decentralization in Post-Conflict Uganda, Burundi and South Sudan », funded by NWO-Wotro Science for Global Development, Grant number W 01.65.332.00, The Netherlands. 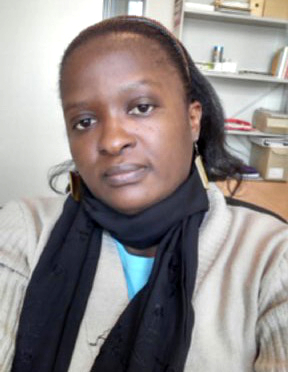 Rosine Tchatchoua-Djomo is a PhD candidate at the African Studies Centre of Leiden University. She received her Master of Science in Rural Development from Wageningen University in the Netherlands, Ghent University in Belgium, and Humboldt University of Berlin (2011). She also holds a Master degree in Agricultural Economics and Rural Sociology from Dschang University in Cameroon (2007). Her recent ethnographic work explores the challenges of decentralized land governance and legal pluralism in post-war Burundi, with a specific focus on the management of displacement-induced land disputes, identity, land rights registration, and women’s access to land. Rosine’s research focuses on legal anthropology, development sociology, forced migration, transnational displacement, land governance, land reform, land conflicts, identity, forestry and agriculture.